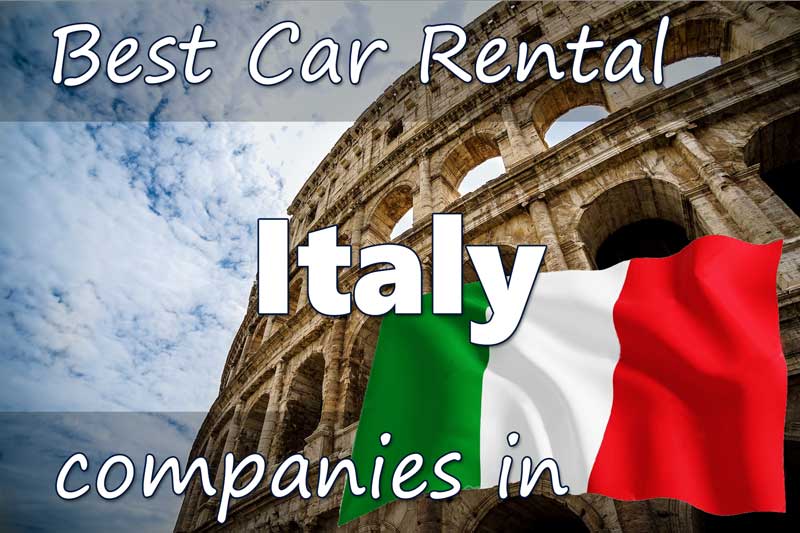 Italy is one of those indisputable travel destinations most people want to go to at least once in their life, and with good reason, as Italy has historically been one of the most important places, and nowadays, it preserves its history very well.

When we think about Italy, we might think about narrow roads with few cars, and if visiting only major cities, maybe renting a car might not be completely necessary.

However, if you really want to get the most out of your trip to Italy, having a car that allows you to freely ride the Italian roads, without having to rely on train schedules, renting a car can be the best way to know the most charming towns and villages along the Italian road.

Choosing a car rental company is not always an easy task in Italy though, and this is why we will know the best companies to rent a car when travelling to Italy.

Whether you want to visit Rome, Milan, Venice, Naples, Catania, Bologna, Palermo, Bari, Pisa, Cagliari, Turin, Verona, Florence, Olbia, Brindisi, Genoa or Alghero, we have made a Ranking of the Best Car Rental companies in Italy in 2020 to help you choose your next car rental booking, which, by the way, you can do easily and at the best price on this website.

Among the many options on car rental companies in Italy, Europcar has been the one receiving the best reviews, which makes this french car rental company a great option for your trip to Italy.

When renting a car in Italy with Europcar, customers can expect to receive a car with good mileage and in good conditions, which is one of the major concerns amounts of people renting cars.

Europcar is a great car rental company, and one of the favourite ones when travelling Europe, so many travellers used to renting with this company might find it especially appealing to continue to rent with them when visiting Italy.

Their loyalty program, free to join, offers many advantages, and if you are already a member of it, you will most likely continue to collect points and get better tiers during your days in Italy.

If you are unsure about what company to choose in Italy, and you wouldn’t want to take any risk in order to obtain a better, deal, then Europcar is one of your safest options, and you will probably be able to find a good deal with them.

Avis is not new in the car rental business, as they have so many locations all over the world, and particularly in Italy, this car rental company is the one with the most locations in the lovely European country.

Their fleet of cars in Italy is very large, and they also offer the greatest amount of offers on cars with automatic transmission in the country, which is something to consider if finding an automatic car is a deal-breaker for you.

Avis is one of the companies with the best reputation in Italy, and also one of the ones with the fewest complaints and bad reviews, which can bring some extra peace of mind, and allow travellers to take fewer precautions before leaving the office.

It is worth remembering that Avis and Budget, another well-know and well-reputed car rental company, share the same fleet of cars in Italy, so you might play a bit with this knowledge when finding your deal.

A smaller company among the biggest international car rental companies, Budget Rent-A-Car is an important company in Italy, which many travellers have used and found no issues and many advantages with them.

One thing to take into account is that both, Avis and Budget share the same fleet of cars in Italy. This means that you might find a slightly better deal with Budget sometimes, and with Avis some other times. Though if you belong to the rewards program of either of them, you will probably want to stay with the most you have invested the most with.

The car rental company that probably needs fewer introductions. Hertz is a ubiquitous company all over the world, and they have several locations throughout Italy, including major airports.

As with their locations in the rest of the world, they have a wide range of deals, as well as a well-supplied fleet, with cars ideal for the Italian streets and roads, and several prices that can help you to sort through the best deal.

Specifically in Italy, Hertz has an overall good reputation, as it is the same company. However, there are a few more complaints than in other cases, though many of these can be solved by doing a detailed check to the car before leaving the office, so that there are no surprises once the car is dropped off.

Being a popular company, many travelers from the United States and other countries in the world who are used to rent with Hertz might feel much more comfortable by continue to rent with them while in Italy.

Hertz’s rewards program is a good one, and if you are already a member of it, it could continue to collect a few extra points, and even to redeem some few free renting days when travelling to Italy.

When it comes to reviews, Sixt has received some complaints from customers renting cars with them in Italy. Though no as serious not to ever go with them, it is a good idea to be a bit more careful and check your car very well before leaving the office.

Overall, Sixt is a well-known car rental, which makes it easier to trust them, and if being careful and renting directly with them when travelling to Italy, you might find a good deal and have a good experience.

A highly reputable company, often chosen as the best or among the three best in the USA, Enterprise enjoy of a rather mixed reputation in Italy, but still, you might want to consider them when deciding for the best car rental deal when travelling to Italy.

In Italy, the supplier for Enterprise is Locauto, which is, unfortunately, a not very reputable car rental company in Italy, which most reviewers advice to avoid.

Of course, Enterprise continues to be the brand, and there shouldn’t be as many issues as there might if renting directly with Locauto, but you should be aware and take enough precautions if you find your best deal with Enterprise.

Certainly not the company with the worst reviews, many customers have found good deals and had a good experience riding Italy with Enterprise. Take enough precautions, take photos of the car before and after, read every paper before signing and you should be fine.

The presence of National in Italy is not as big as there is for other car rental companies, but there are enough deals available online as to overlook this company.

Reviews of customers renting with National in Italy are mixed, which makes it important to be careful and consider other options. But if you do decide to go with National Car Rental Italy, take your time to read before signing, and take enough pictures of your car. This should be enough to have a great time in Italy.

The third company among the group of smaller international car companies operating under a major Italian car rental company in Italy, Alamo has fewer locations and options for renting a car in Italy, but they might still be an option to consider.

Overall, Alamo is known for offering considerably good prices on cars, and this might also be the case when considering your options for renting a car in Italy.

As a company with a smaller presence in Italy, there might not be many negative reviews for Alamo, but it is important to take enough precautions, such a taking good pictures, and if possible, renting directly with Alamo Italy, as opposed to doing so with a car broker to make sure you will get the best experience.

Throughout history, it has got very mixed reviews, sadly often tending more towards the negative side of the spectrum, especially when it comes to unfair damages claims on the cars.

However, since 2015 Maggiore is owned by Avis, which is one of the best car rental companies in Italy. Making a deal with Maggiore is not exactly doing so with Avis, but their customer service has certainly improved, and reviews are much more neutral now.

Being a company with such large presence in Italy, their deal could be hard to ignore, so if you decide to rent with them, make sure to acquire good insurance, read the contract and get a copy of the papers, and you should have a great experience in Italy.