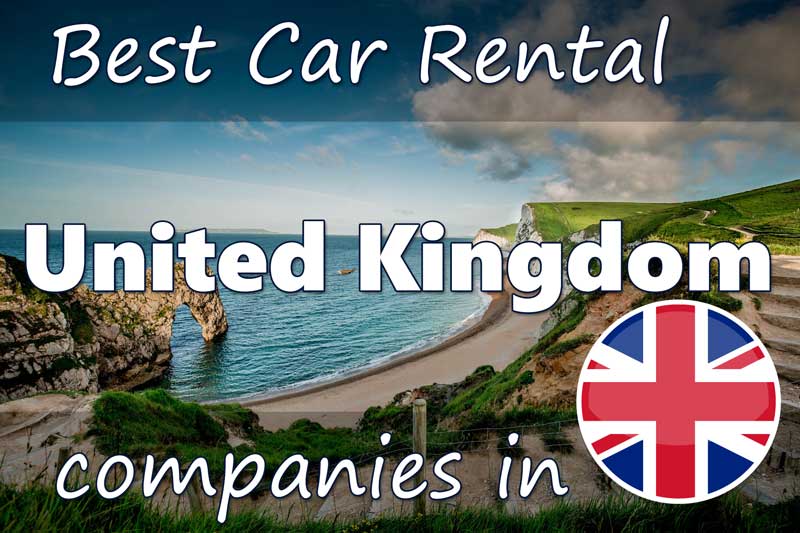 There are some destinations that are always in the minds of those considering where to travel them, and the UK, especially its capital London, have privileged places among this prestigious ranking.

The United Kingdom is more than London, though, as it is comprised of four beautiful countries: England, Scotland, Wales and Northern Ireland. All of them with beautiful places and cities that might be better visited by renting a car.

Many famous musicians, artists, stars of different sports and historic people were born in the UK; and some of its cities are references in fashion, culture, arts, and food worldwide. This makes it hard to overlook the possibility of driving a car when visiting the United Kingdom.

However, when doing the research on what car hire to choose, the opinions are rather diverse. This is why it is so important to know what are the best car rental companies for your next trip to the UK.

In the UK, if you are looking to rent a car in any of the countries in Great Britain or Northern Ireland, you will most likely see the yellow signs of Hertz Rent-a-Car very often, as one of the major international car rentals, has also a very strong presence in the United Kingdom.

Some good reasons for renting with Hertz during your time in the UK are the many locations they have on the island of Great Britain and Ireland; as well as a fleet of many different new cars that will most likely not give you any issue.

If thinking about taking your car from a country in Great Britain to Ireland by ferry, you can do so, but you must ask a qualified Hertz UK agent about extra fees for taking your rented car to a different country, and you can cross the border from Northern Ireland to the Republic of Ireland, but cannot drop-off your car in the republic if it was rented in the UK.

Also, for those who are used to rent with Hertz in other parts of the world, it might be a good idea to continue doing so in the UK, as you could continue using the benefits of their rewards programs.

There have been customers who have had a negative experience renting with Hertz in the United Kingdom, and some of these have to do with the insurance. Do make sure to understand all of the mandatory insurance and optional services when signing your contract, so that you can be sure you will pay exactly for what you signed.

Sixt Rent a Car is one of the major car rentals in Europe, and they have a fairly considerable market share in the UK, with several locations in major cities in the United Kingdom and airports, and also counts with a shuttle service.

As a major car rental, you should expect an overall good service when renting a car with Sixt in the UK, with cars in good conditions, and very variable rates. For instance, if renting in Northern Ireland, you will probably find a very good deal with them.

Do make sure to be informed about the mandatory insurance, such a the Collision Damage Waiver (CDW), and what you are paying for at the moment of renting with Sixt so that you can be sure you are not paying for something you don’t want to pay.

Overall, Sixt in the United Kingdom is a company that receives good reviews, with some negative experiences from a few customers, but some of them could be avoided if renting directly with them and making sure to ask all of the necessary questions you may have, so you have the best possible experience and pay only what you signed for.

Avis Rent a Car is a car rental company with a very good reputation and several locations all over the world, including locations in all major cities and airports in the United Kingdom, where they enjoy a good reputation.

Their fleet of cars in Great Britain and Northern Ireland is made out of cars in excellent conditions, which can bring some peace of mind in the pick-up, as it is easier to spot any scratch and let the company know it, so that there are no extra charges.

When renting a car with Avis for a trip to the UK, do consider that if renting in Northern Ireland, you can take your car to the Republic of Ireland but this is subject to a cross-border fee, and an Avis car rented in the island of Ireland cannot be taken to Great Britain (Wales, Scotland, and England).

If considering Avis, always favor booking directly from their UK site or with a representative in the UK, so that you can be sure you will be paying exactly for what you have signed, and you can have the best experience in this beautiful country.

Enterprise is a major and well-reputed car rental company in the United States, and in the United Kingdom this reputation mostly remains, and you can expect a good experience if you decide to rent with Enterprise during your to,e to Great Britain or Northern Ireland.

The experiences of customers who have rented with Enterprise in their locations in the UK have been mostly positive, with some exceptions, but many of these have had to do with not knowing about certain laws and rules in the UK such as insurance or areas one should not drive in.

For those wanting to rent a car in Northern Ireland with Enterprise and take it to the Republic of Ireland, there is an additional cross border fee, and you might ask a representative in advance if you are considering taking the car from Northern Ireland to any country in Great Britain to know if you will be subject to extra fees.

Overall, Enterprise is a good option to rent a car with to visit the UK, but you should be informed about insurance and extra fees, as well as trying to rent directly with the company or being well informed if renting through a consolidator so that you don’t find surprises in your receipt.

In the UK, Budget Rent a Car is owned by Avis, so you can expect good quality standards, and this can be a great alternative if you are considering renting with Avis, as you might find a better deal with them while getting the same service.

One good point in favor of Budget is that their website works very well, and their platform is quite responsive and fast, allowing you to easily get all the cars or vans available for the date, time and locations you have chosen. Though there are a few things that might be better, such as being able to choose how many baby seats or additional drivers will be needed.

However, do notice that their cars include the mandatory Collision Damage Waiver, but there are not options to add extra coverage, which might or might not be a problem for you, but it can definitely be solved by asking a representative of Budget UK.

As with most car hires in the United Kingdom, there have been negative reviews and experiences from some customers. In order for you to get the best experience, ask all of the questions to a qualified representative, and take photographs of the car during pick-up and drop-off and you will probably have a great trip.

Thrifty Car & Van Rental is yet another well-known international car rental, and it does have a good presence in the United Kingdom, with several locations in all major cities and airports in the country.

This company might not be as popular as others, but you could definitely consider it when comparing the prices of car rentals in the UK, as you might find the best deal with it.

Also, if booking directly on their website, which is recommended, you will also be able to pay with PayPal, which might be quite convenient for many travelers. However, do ask other travelers or make enough questions to a Thrifty representative to make sure you will not have to pay extra fees.

Do take into account that if you are renting in the UK mainland, that is either Wales, Scotland or England; you cannot take your car rented with Thrifty to Northern Ireland. In the same way, get inform about extra fees you might be subject to pay if considering driving your car rented in Northern Ireland to the Republic of Ireland.

Thrifty is another company to consider for your trip to Great Britain and Northern Ireland. But you should remember to be careful, understand what you will be booking, what are the extra services you could opt to get and to take photos of your car during pick-up and drop-off.

A company better known in the United States, Alamo is a car rental with locations in all major cities and airports in the UK. Even though it is not the most popular one for people traveling to any of the countries in the United Kingdom, it does have good rates that might make you consider renting with them.

One thing to take into account is that Alamo operates under Europcar in the UK, and Europcar is a well-reputed brand. This could give some peace of mind to some people who might not be very sure about renting with Alamo.

The booking process through their website is quite straightforward, but if for some reason the platform cannot find any rates for the options you are inputting, check things such as times or the age, as apparently the engine won’t find rates if the age of the drive is less than 25 years old.

If you take all of the precautions when renting a car in the UK with Alamo, and you make sure to read the contract, you should get what you were expecting, and pay what you signed for.

As one of the major car rental companies in Europe, Europcar is an important car hire in the UK and one you should consider when deciding what to company to rent from.

One thing that might put some people off are their rates, which are among the more expensive side, but it might still be worth considering them as they have a good reputation, and their booking process through their website is quite straightforward.

There have been some negative experiences reported from customers who have rented with Europcar, especially with their location at the Heathrow Airport in London, especially claiming that they are suggested an upgrade that considerably increases the price of the car.

This irregular situation might have an explanation, but do make sure to be informed about what you are rented, book in advance, confirm a few days before your trip, and be confident on what you booked, so that you can be sure you will have a great trip to the UK, and that your experience with Europcar will be positive.